BAUCHI — In a remote village in northern Nigeria, the opening of new non-formal learning centers is sparking further investment in children’s education from within the local community.

Residents of Walai village, located in the Itas Gadau area of this northern state, welcomed the establishment of non-formal learning centers to serve young girls and boys who had largely been exposed to only Islamic education. The center is part of the Northern Education Initiative Plus project, which is funded by the United States Agency for International Development.

Walai is far removed from any city center, and children have to trek several miles to get to traditional schools.

The five-year project, implemented by Creative Associates International, supported the opening of 800 non-formal learning centers in disadvantaged communities in Bauchi and Sokoto states, where many children have been disenfranchised from the education system.

Learning facilitators were trained to teach about 36,000 students literacy, math, life and vocational skills for a minimum of six hours every week.

Two such centers were set up in the village of Walai.

“We were very happy when the learning centers were opened here … We wanted our girls too to be educated.”

“We were very happy when the learning centers were opened here because we visit the hospital with our wives and they are attended to by male doctors. We really began to desire a change. We wanted our girls too to be educated,” says Salihu Adamu, who runs one of the non-formal learning centers.

News of children’s success in the classes quickly spread within the community. Within a few months, a philanthropist from the local government decided to support the education effort with his own funds.

Choosing to remain anonymous, he donated money to Adamu through a family member to build a block of four classrooms at the center, where children had been having lessons outside under the trees.

“The philanthropist said he had heard that children were learning to read and write and wanted them to do so in a safe and conducive environment,” says Adamu. “We are very grateful to the initiative for starting something good in this community.”

Now, construction of the new classroom spaces is almost complete and will accommodate 180 students in the next enrollment period beginning in July.

The initiative will strengthen communities’ ability to provide quality education by focusing on building programmatic ownership and commitment to learning among federal, state and local governments.

Thousands of local committees, called Center Based Management Committees, will be trained on how to advocate for improved education within their communities.

The committee agreed to embark on small projects to improve the center’s learning environment.

“The committee fenced the center, constructed two classrooms and two toilets. We also bought a container to store drinking water and bought bags for the children to store their books. The children were happy coming because they were learning but now they are happier learning in a more conducive environment,” Dinawa says.

Dinawa says the local government also decided to pitch in to hire more instructors to teach children who could not be officially enrolled in the program but who were equally interested in learning.

“Initially we were donating voluntarily to pay the facilitators, but the Local Government Authority heard and decided to take that responsibility,” Dinawa says.

Dinawa says improved education for children can lift up the entire community.

“There was a time when someone from another community was elected as councilor because there was no one who could run for that office here. We can only stop that from happening if we educate our children,” he says.

In addition to basic literacy and math skills, communities have coalesced around improved access to vocational training at learning centers specifically for girls.

Young girls who attend the Mashema Arewa Adolescent Girls Learning Center in Itas Gadau in Bauchi now have the opportunity to learn skills like bead-making, knitting and sewing.

Azimi Abba was troubled by the number of girls in the community who had dropped out of school. With help from the Federation of Muslim Women’s Associations in Nigeria, a partner in the project, Abba has converted her own home into a place for girls to learn.

“We mobilized traditional leaders and community members to talk to parents to allow 45 girls to come and learn at the center. With the bead making they have learned to make earrings, necklaces and bracelets and they have learned to sew gowns, wraps and blouses. They also knit sweaters for children to wear during the cold,” says Abba.

The leadership committee managing the center provided the necessary materials, and the proceeds from selling the girls’ products will be invested back into the center.

“Our children were roaming the streets but now they are learning to read and write and also have a skill that could possibly become a business,” says Committee Chairman Magaji Abubakar. “They could use it to support their families.” 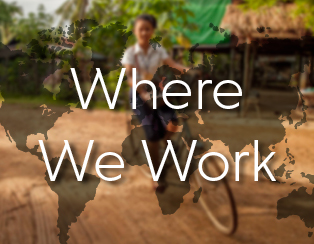